You can learn about the different types of tapes here:

“10.2 Goalkeeper’s Stick: Goalies must have a knob of white tape or some other protective material approved by the League at the top of their goalie stick shaft. Said knob can be no less than 1/2″ thick.”

However many of us beer leaguers don’t need to follow this rule, however, it is good to note the rules in case your league is strict. The reason for the use of white tape, rather than other colors is to distinguish between the puck and the knob of the stick. Some goalie’s have a quite large knob which can be mistaken for a puck. Keep that in mind if you want to use another color tape as well. You would hate to have a close goal called because the ref saw your knob cross the line rather than the puck.

There are a few different ways of taping a knob. Some like a thin large knob as seen here, and some barely have a knob at all, like Carey Price (seen bellow) 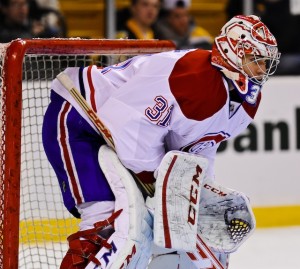 Most goalies that I’ve encountered tape a medium sized knob and tape a few inches down the shaft. Like Martin Broduer’s stick. You can also add a ribbing around the shaft like a players stick as seen here for a nice tight grip when you’re stick handling. Check out the video below to learn how to tape your knob.

Taping your Blade
When it comes to your blade, you have a ton of freedom to tape it however you like. Just like players sticks you can tape it toe to heel, or heel to toe. There is less of a difference because there is much less stick handling in goal. So which ever you are most comfortable. Some goalies like to tape their entire blades and even partly up the paddle. Lets see some examples; First we see Patrick Roy’s stick. He tapes most of the blade and a strip on the paddle. He doesn’t completely cover the toe of the stick but many guys do. This protects your stick a little more than using less tape plus may give you a more consistent rebound rather than contacting the stick directly. Another more traditional method is Martin Jones’ stick. He exclusively tape the main section of the blade all the way up to the toe. It is all preference, so try taping it different ways and see what you like.

For the process of actually taping your stick, lets go back to our friends are Howie’s Hockey Tape to watch them tape a goal stick blade.

Taping the handle
Some players like to tape the top of the paddle to get a tighter grip on your stick when in your stance. One of the more unique handles is Henrik Lundqvist. Not only does he tape his handle, he also gets a modified paddle shape which you can learn more about here. Paddle modifications aside, he use grip tape to his handle giving him a nice tight lock. I trick I like to use is to first wrap it in foam wrap which makes it thick without adding weight if that’s something you like.