It was late 2015 when I first saw video of what was then called the AirBlade. The internet was filled with jokes and speculation about the all carbon “waffle stick”, as it was referred to. It gave me Flashbacks to the Reebok 8.0.8.’s with air holes in the shaft. It was nice to see someone trying something new, but would it ever really take off?

Four years later and I find myself sliding the Mirage out of its plastic sleeve fresh from the factory. Holding it in my hands I still didn’t really get it. The graphics are simple, and classic. …and then you look down at the blade. Why? I kept asking myself as I looked it over.

It was fairly light; at 425 grams, right in the mix will all the other top end twigs. It had a nice balance to it. After-all, replacing a foam blade with solid carbon I was expecting it to be very blade heavy, which it isn’t. The texture of the blade was odd, but it was a good reminder not to tape the blade. Yeah, that’s right, you don’t have the tape the blade. I had a game the night I got the stick so I quickly made my knob and headed to the rink. I was familiar with the curve, the flex and the lie were all exactly what I wanted so I figured what better test than just getting right on the ice and giving it a real workout.

Admittedly I was still less than convinced, but once I got onto the ice something finally clicked. I was so hung up on holes for “air flow” that I hadn’t realized the fringe benefits that came along with this overhaul of the blades design. In order to put those air holes there, they had to rethink the blade entirely.

The Liquid Tape and the raised texture on the blade, which admittedly looks odd, was gripping the puck in a way that tape and wax just can’t. Blade of the stick is rough and tacky, but those tiny nubs on the face of the blade were providing a ton of puck feel (look at the photo to see what I mean). I know this was likely the solution to the no tape issue and not the inspiration of the resign, but it’s honestly my favorite part about the stick. 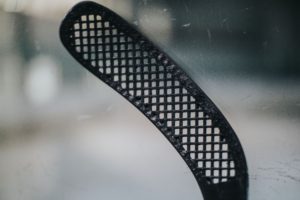 Another effect of all those holes in the blade is its impact on flex. I’m no stranger to all the developments over the past few years in adding flex profiles to blades, especially now that more and more players are shooting off the toe, myself included. The Diamondaire Blade has a ton of flex in the blade and when added to the low flex shaft I had selected yielded an incredibly quick release. Wrist shots and quick snap shots felt like they were being launched off the stick.

For those in the market for one of these, consider stepping up a flex. While the shaft was likely spot on the 85 flex I had ordered, the additional spring in the blade made it feel like something much whipier. No stranger to the 75-77 flex offerings the other brands have been pumping out lately I had no issue adjusting for my game. It’s just something to keep in mind when getting your own.

Thankfully the Zamboni driver was taking a nap after the game ended and we won so my guys weren’t in any rush to get off the ice. All the lefties hung around and the Mirage got put through its paces. Their responses all rang true to me. For all the funny looks it got that night, the Mirage just delivered. If it’s half as durable as they claim, it’s worth every penny.  Even if something happens, it comes with a 90-day warranty, which is 3 times the average.

Did I feel the advertised increased swing speed? Not really
How long will that Diamond Coat Liquid Tape last on the blade? Not sure, but it was my favorite part of the stick. You get all the grip of tape but without the loss of puck feel.
Will I continue to use this? Absolutely

One game is good sample, but to answer to the claims of durability surrounding the solid carbon fiber and to see how long that Liquid Tape hangs on, I think this story is going to need a sequel. I’m going to try this stick for a few weeks and a few games and we will see what happens! Thank you to Tovi Hockey for letting us try it.