Many of you may have heard the term “kick point” or “flex profile” but what is it? Composite sticks are made up of carbon fiber sheets with interlocking or overlapping fiber sheets, creating sort of a grid like pattern in the stick. This makes the stick durable and very strong. However, this hinders the sticks ability to flex or bend because the tightly packed fibers; they are otherwise too strong. To counteract this, they create a part of the shafts that is softer and able to flex while leaving some parts stiff. The stiff spot is called the kick point. The purpose of the kick point is so you get a consistent flex or, the same shot every time. This also adds performance for a certain type of shot depending on which kick point you have. All sticks in the past few years have a designated kick point.

What are the types of kick points?

There are 3 major types of kick points: Low, Mid and Variable/Custom. Low kick point sticks flex at the bottom of the stick allowing for a quicker release on wrist shots and snap shots. It is usually preferred by forwards, and players who like a quick release on their shot. Mid kick point sticks flex in the very middle of the stick. They are great for slap shots and players who really lean into shots. It takes slightly longer to get to maximum velocity on wrist shots when using a mid kick stick. The last type is variable or custom kick point. They are available on very few sticks like the, Bauer Vapor APX, APX2, and CCM RBZ line. They offer a double flex profile for low and mid kick allowing you to get the right flex no matter what type of shot you take or where you bottom hand is placed.

What is the science behind the kick point?

The kick point is where the stick is stiffest verses where it can flex. When you take your shot you allow the stick to do a lot of the work for you. It does this by bending and then returning to its original shape. This action can exponentially increase your speed and velocity. When your stick is flexed it has a lot of potential energy, which is then released as you take your shot. The more volume or length of the shaft that is flexed, the more velocity your shot can have. For example, a mid kick point stick will bend the entire length of the shaft because the stiffest part is in the middle. Alternatively the less length the stick has to flex the quicker you will get the shot off but cannot have as much potential energy. For example, the low kick point stick has only the bottom portion of the stick that is actually doing the bending. Only a small amount of stick is gaining energy so the stick will return to normal faster resulting in a quicker shot but not necessarily a faster/harder one. To put this in perspective, a weaker slap shot may have greater velocity than a hard wrist shot because of the amount of potential energy gained from the stick. Like I mentioned earlier mid kick point sticks take longer to maximize velocity because you need the entire stick flexed to its maximum.

These sticks were specially designed to illustrate the kick point and design of Bauer’s sticks and are not for retail.

Let’s start at the top. This stick is a Bauer Supreme TotalOne. It has a mid kick-point. You can see that most of the stick is yellow but just at the very bottom is some red. The red sections is where the stick is stiffest and the yellow is where it is softest. By having a stiff lower section it creates a bow effect in the shaft allowing you to load energy into the shot. Once you release the shot, the stick flings forward increasing the velocity of the puck. 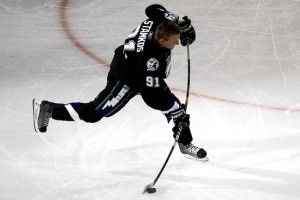 We see here, Steven Stamkos is loading heavily into this slap shot and the stick is bowed right at the middle. He is using a mid kick-point stick, the Bauer Supreme TotalOne to be exact.

Back to the picture. In the middle we see a Bauer Nexus stick. Bauer categorizes the Nexus as a mid kick-point stick, although I would have to disagree. As you can see it is stiffest in the middle with semi-stiff on either side of the red (in orange) and softest on either ends. This would make it more like a low kick point but softer. The soft (yellow) bottom of the shaft, towards the blade, allows only the bottom of the shaft to bow as well as by your hands. This creates the bow effect but requires less pressure from the shooter and less time for the stick to release. We will see an example in the next section.

Last but not least is the bottom stick, which is a Bauer Vapor stick. It has a very stiff mid section and a very soft upper section by your top hand. This causes very easy loading on the shot because your upper hand can increase your flex. 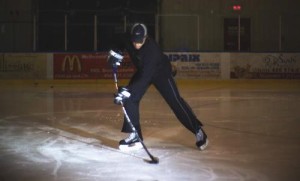 Here we see a shooter taking a wrist shot. You can see that the bottom of the stick is quite bowed but the top of the stick is relatively straight until you get to his top hand. This is a low kick point stick.

So what does all this mean for you?

You should choose the right flex profile for your playing style. If you are the type of player who likes to take a lot of slap shots you may want a mid kick stick. Alternatively, if you like to take a lot of quick one-timers you may want a low kick point stick for the quick release. Just because you use a mid kick point does not mean your shot will be harder, just like using a low kick point stick won’t necessarily give you a quicker shot.

What do you do if your stick breaks?
Theres nothing worse that a pile of broken sticks taking up space. I like to make lamps out of my broken shafts. Intrigued? Check out my Etsy page 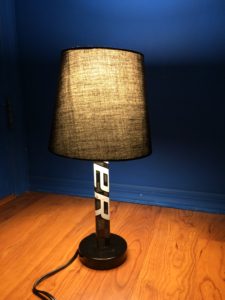 Which Kick Point do you Prefer?