You may have heard the term “Pro-Stock” stick before, but you might be curious; what exactly is a pro stock stick?

Professional hockey players need the best tools available to play at their best, so they are given (or purchase in some cases) sticks that they can pretty much customize in any way they want. They are able to customize curves, longer or shorter length shafts, change shaft dimensions or textures, and can get custom colors. I’m sure there are also many other ways they can be customized as well.

What are the differences between a Pro Stock and a Retail? 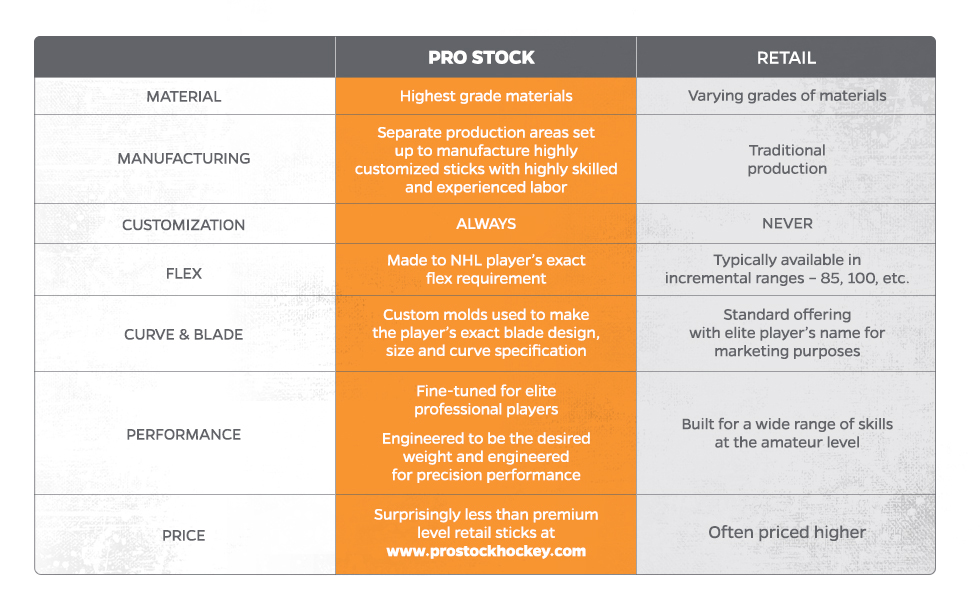 Why don’t players just use a standard stick or retail model?

In fact many players do use sticks that are fairly close to retail models with only minor changes, while some use complete overhauls. If you have the option to completely customize why would you not want to? Some players take it ever further. For example, Edmonton Oilers alum, Ryan Smyth used to get a standard Warrior composite shaft with a wooden blade that he used to bend the curve himself under a door. If you want to check out more about here’s  a link to the video. Even know many retail sticks bare a players name, its not likely that that player actually uses that stick or curve.

“I bought a pro stock but it doesn’t look or feel like the retail model.”

This isn’t actually such a unique issue. It doesn’t feel like the retail because, plain and simply, it isn’t. Retail sticks are designed for the average player with a standard where as player sticks are all different. Even from player to player the same model stick will be different. Another possibility is a sponsored player. Sponsored players (generally the ones who’s names are on your stick) have to “use” a certain stick so consumers watching see them using the latest and greatest stick. But what if they don’t like that stick?  Ever year newer models are being released but that doesn’t mean the player has to switch. But the manufacturers don’t want their consumers seeing them using the older model. Why would you get the latest and greatest if the old one will suffice? So they may put the newest paint job on an older stick. Patrick Kane is a great example of this. He uses a Bauer One95 which came out around 2010. If you look at the picture below, we see him with a stick clearly marked “Vapor APX”. (Click the picture and see the close up) 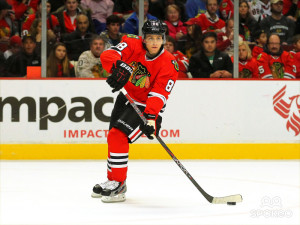 This stick is actually a One95. This isn’t necessarily a bad thing for Bauer at all. In my opinion the Bauer Supreme One95 is on the top 10 best sticks ever made. Patrick Kane is currently one of the most followed and popular players in the NHL so why wouldn’t you want to see him flaunting all the newest gear? I have a pro stock which looks like a Bauer Supreme NXG where it is actually a Supreme One.9.

Another explanation is the player wanted something standard but with a different feel. Maybe they liked the feel of the shaft but wanted a different kick point, or maybe a heavier blade. Some players even like to have a sandpaper like grip which would change the feel drastically.

Why would you want a pro stock?

Pro stocks may have a unique feel and curve to them which make them very exciting to play with. You could shop for sticks and never find 2 that are alike. Also, to think that one of your favorite players could have used it in a real game is pretty cool. They are an affordable option for a great and unique stick. You can also get specialty curves that you cant get in retail sticks.

Why are we able to buy pro stocks?

Players sometimes change, brands, teams or even specs about their sticks and then they are left with extras. You cant really give a players customized stick to another player because it probably wont be up to their specifications. Also, because of the customization, many sticks are made by hand and unfortunately, some sticks end up with slight imperfections that are not up to the players exact specifications so the players send them back. Some imperfections could include, not the exact curve, oddly shaped blades*, the wrong weight, not enough or too much grip coating, etc. There is an infinite amount of possibilities but there could also be nothing wrong with the stick, just a surplus. Manufacturers are always trying to get players to use new sticks or features, that the player may not have liked.

* I have gotten an uneven blade, Fat on the bottom skinny on top

They are cheaper than retail, is that bad?

One major downside to pro stocks is that they do not come with a warranty. Because of the customized stick, they can’t guarantee that it will hold up to market standards. Hence, no warranty. Luckily they can be cheap enough (possibly half the price or less) than its retail counter part.